There really are a million ways to be.  I've said this before, Cat Stephens' tune just says it all but for me, the way to BE must be in combination with nature in some way, shape, or form.  The word "amazing" can mean so many different things to different people.  To many, that might be a musician, an actor, an athlete.  But to me, an "amazing" person is someone who can take the root of a plant and make a medicine out of it; someone who can look at a plant or an animal, and know it's ailment and it's need;  someone who can predict weather patterns like he has a direct line to the weather-maker in the sky.  Amazing is making everything you need in life with your own two hands.  That's what amazing means to me.

Perhaps I'm judging with a bit of confirmation bias here though, because my parents are such people.  My whole upbringing was immersed with those values and practices.  Nature taken for granted as partner through the seasons.  They still have a full garden every summer.  And eat the proceeds of that great effort all winter long.  My mom has effectively bartered many haircuts--human and canine--and computer repairs for priceless jars of her well-preserved bounty.  She has a process for every Mason jar that even my niece Madelyn adheres to like it was her job.  As a child, I never knew what canned green beans tasted like, or canned potatoes, or powdered potatoes... ugh ... what a sacrilege for an Irish!   I went home recently to get re-calibrated again and it's gotten even more amazing around there!  Mom just made her own bug spray with apple cider vinegar and hot peppers from the garden, and at the moment she is in the planning stages of making a tincture with the neighbor's Echinacea crop with a safe and edible solvent.

I guess this is why I feel so much amazement when I read about the people who grow that controversial plant known as Cannabis.  We're talking mad-scientist meets tree-hugger.  I remember this one patient grower I met on a gardening forum who made his own fertilizer as many of us do.  But he took it all a bit further by urinating on his outdoor compost heap.  He did this only so often, and only if he hadn't consumed any prescriptions or medicine recently.  He took it even further than that by only using his urine if he were sure that all the food he had eaten was organically grown, and that the meat he had consumed was raised eating organically grown grass and grains.  He'd let the mixture ripen in the sun--active in its micro-biology and teaming with usable nutrients--and make a tea for his medicinal ladies.  He swore they loved it and the pics I saw were glorious trees of medicine.  Urine Therapy is a common practice in humans in many other countries actually.  Talk about your "OG", that is the epitome of organic growing!

There are gardeners who play music for their girls, always wondering which genre yields the densest flowers.  Does photosynthesis like the brass horns of Chicago or the funky guitar groove of Jamiroqai?  Others stroke them lovingly as though the contact can woo the medicinal properties into those flower buds.  These are people who, like my folks, know that the proceeds from these efforts will come in handy all winter long--handy to say the least.  There are those who meditate with, to, and for their plants as if the Goddess herself resides therein.  And every single one of these people mourn the loss of even one of those plants, those girls, those green goddesses.

Imagine owning something that gives you flowers that contain medicine.  Sounds like a fairy tale doesn't it?  But it sort of reminds me of India's love and uber respect for the cow, knowing that alive she gives so much.  She gives life and sustenance as though her very existence is for the benefit of mankind.

But is all of this just nonsense, or all in vain as they say?  Is the fertilizer more powerful because it was made with love?  Or are these gardeners simply seeing what they want to see?  We know for a fact that nature has a calming effect on the human, it's been proven time and time again.  But do these eccentric and quirky gardening practices really benefit the plant?  Well get this, it's been studied extensively.  I recently read one such study from Austria on the effect of verbal contact on common marigolds.  As it turns out, if you diss your plants and treat them with negative thoughts and words, they'll be a mess of disease and aphid infestation with very few flowers.  Our thoughts and our intentions have power.  We can affect our surroundings.  And so we do ... oftentimes without even knowing it.  Yes positivity has a profound strength to it, but much more affective for all living things is the profundity of the negative.  It's simply easier for some of us to see, show, and share the negative instead of showing happiness.  A part of what we call the human condition?

Taking part in the creation of life is a life-changing thing.  Do it on the daily and you will reap the rewards of less stress, better mental clarity, and better sleep just to name a few.  There is now a whole field of medicine called Horticultural Therapy.  No pill can create the ease of stress and mental well-being that seeing your effort manifest from dormant to living, can create.  Pride in yourself and your accomplishments is medicine in itself.  My folks do it every single year in both vegetable gardens and flower gardens, as do so many of their neighbors.  The magic of life takes place each February in windowsills and under spare light bulbs in the Northern Hemisphere all across this globe; and on front steps, roof-tops, and community garden plots in the rest of the world.  For that moment the earth, sun, and moon come together with You, a seed, and the Spirit ... to grow life.

This is my Daddy ... the Gardening Genius in my life.  Just look at those Lilies !! 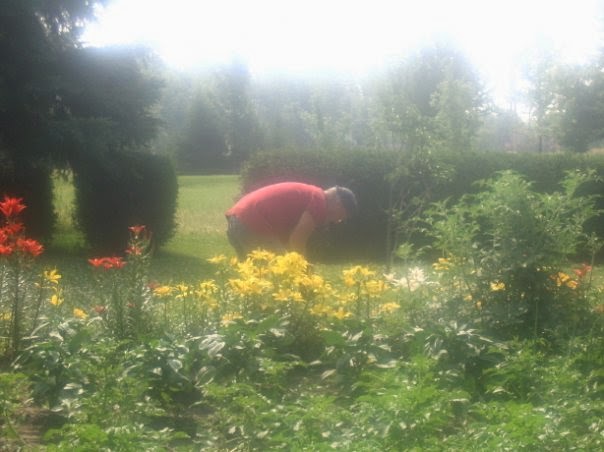