I work in an office building sandwiched between the beer store and the liquor store.  I start at 10 am and so almost everyday I say good morning to the man sitting on his walker guzzling the largest can of beer he could buy.  I see the same people walking into the beer store with their empties and walking out again with them full.  I watch as pedestrians walk under the building I sit in, to drink the cans they buy next door.  Last week I watched as a father and son bonded while loading cases of empties into the cart to take in for the refund.  Working and living in this area positions me to see the desperation that exists around alcohol and my fellow Canadians.  The number of individuals I've passed counting change to use for booze is now too great to remember.  Sadly it's becoming normal for me to walk past this on my walk to and from work.

Whether due to brain receptors, societal conditioning, or merely due to its effects, alcohol is one of our most popular recreational substances.  Unfortunately though, alcohol is poison and if you were to take a cotton swab drenched in vodka and rub it on your neck every day for mere weeks, you'd feel what I mean.  Alcohol burns the uppermost layer of your skin upon contact.  Imagine what it's doing to our insides.

And I'm no prude nor am I sober.  In fact, about two weeks ago my work stress was elevated so I bought myself some vodka.  I've been having a little nip almost every night since then.  It dulls the thoughts and now, fourteen days later I almost crave a drink by the time I clock out of work.  Another thing I've noticed is that my tolerance is rising very quickly whereby two wee drinky-poos used to do it for me, I now need three.  Will I need four next week?  Is this the beginning of something for me? Am I drinking responsibly!?

Upon walking home today from downtown, I found myself choked by the rising number of points of sale for alcohol on the main drag.  More wine stores OPEN LATE!  More bars, more craft breweries with whopping alcohol percentages that should really come with a warning.  I often wonder if tending bar at a craft brewery requires different training since the beer you're serving can oftentimes boast twice as much alcohol as other beers.

But let's protect the children.  Oh the children and their growing minds!  I'll never understand how big Tobacco can sit back after having so many marketing restrictions placed on their poison to watch big Alcohol be allowed to sell and thus advertise WHERE THE KIDS ARE!  Have you checked out the beer aisle at Lobl@ws lately?  That is some clear and fog-resistant glass eh?  Sheesh, if only the frozen vegetable aisle could have the same expensive displays!  I wonder how many empty beer cans the staff of these grocery stores find.  I wonder how many school kids can be heard talking about sampling Dad's beer.

Why are we allowing select grocery stores to advertise that they sell BEER HERE?!  Does it matter that a fresh study published last week in JAMA Psychiatry concluded that the drinking habits in the U.S. amount to a public health crisis?  As for Canada, according to this report from 2015, Alcohol is the top risk factor for disease among Canadians aged 15 to 49.  So we're making it more accessible?
Last month Apple Ciders were added to the shelves of those select grocery stores in Ontario because popularity demands it.  We know that stress increases consumption, so as life gets stressful Canadians get thirsty.

Of course, in many ways it's fine that they market to us, warn us of the dangers, and allow us to decide.  But for me, reading "Please Drink Responsibly" signs affixed beside the Caramel-flavoured vodka feel somewhat disingenuous.  Honestly, the Cream Soda bevvie I tried last week was made so that I couldn't even taste the 5% alcohol it contained.  A kid could guzzle a dozen of those in no time. 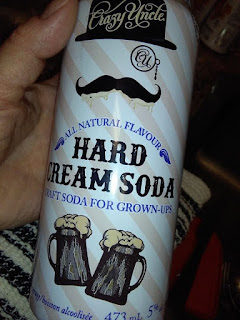 Like I said above, I'm no prohibitionist but I am wise to the powers of many drugs, especially alcohol. It seems to many that Canada is dragging its feet on legalizing Cannabis, the safer option to alcohol. They're still not sure if we too can have Cannabis stores that are allowed to be OPEN LATE like the wine stores are with signs that say CANNABIS HERE!  Like alcohol, they could  warn us of the dangers, but allow growers to market to us and let us decide about Cannabis too.

In 2017 with a balanced Parliament, we should surely see the dangerous hypocrisy here.  As an aunt of a 14 year old, how recreational substances are marketed to my niece is of concern to me.  Rampant marketing, rising alcohol levels, and better access is not good for Canadian society and yet regulation for booze is getting more lax.  It's high-time we were real about Cannabis too.

Posted by the couch activist at Sunday, August 13, 2017 No comments: