Who Is Responsible For Starting This Pancorruption?

Posted by the couch activist at Tuesday, October 26, 2021 No comments:

The Power of the Dick Pic

A little over two years ago I was shown a dick-pic by a superior while working at a new job. He had sent my co-worker home early and at about midnight, began telling me about his sexual preferences. I needed that job so I made myself smile and nod, answering the phones “SOS Taxi” while he held his fingers up to show me the girth of his penis. He described in detail the sexual encounters he’s had … “SOS Taxi” … the cock rings he owns … “SOS Taxi” … the positions he’s been in … “SOS Taxi”.  Details that no new employee should have to hear, while working alone at midnight with a virtual stranger.

When his smoke-break came I was finally able to breath for a moment or two but … “SOS Taxi”... had to keep working, someone had to answer the phones. On his way back to his desk he paused beside me and showed me his own proud pic, an image now burned in my grey matter. There are so many things about this night that will never leave my memory. The pride in his grin, the visual excitement my own discomfort brought him but … “SOS Taxi” … still when I safely got home I remember wondering wtf just happened? Did a closet-homosexual superior just come out to me? Or was he trying to come on to me? Was I safe alone there with him?

It was several days later until it hit me. That picture shoved in my face kept me from having an orgasm with my husband for an entire year. It still affects me to this day when it comes to many aspects of our relationship. I wanted him to do something about it but I didn’t want him to do anything about it. Stuck in this circle of anger-- I feel it still.

In fact earlier today I sat here talking to a good friend about the trauma involved with infidelity while a married friend is texting me offering to send me a dick pic of his own. I’ve given this man no indication whatsoever that I’m interested in it and our recent friendship has revolved around Cannabis not sex.  But still the offer was put to me more than once today.

Dear friends of the opposite sex, you clearly don’t know the power of the dick pic. According to the law, sending someone a picture of your genitalia is considered sexual harassment punishable by law. And according to the court of public opinion, any ‘committed’ man sending or showing a picture of his penis is scum. What about the court of your wife’s opinion? Your sons’ opinions? Your daughters’ opinions? By sending the dick pic you are sending off all control of how your family views you. I can’t believe that’s okay with most married men. And still the fact remains: if I tell his wife, I’m the asshole here.

I did tell my manager who told the owner of the taxi company. My harasser got one week off work as punishment. And I got told that if I can’t work with him for 8 hours every week I’ll lose those hours. Like many jobs, this one had a rumor mill. When many of the fatherly drivers heard what happened, they wondered why I didn’t do more. This is a poignant point to make here. The one thought I should have gone to the Police. I wonder what I’d say. “My superior just told me he’s a closet homosexual and then showed me his dick pic.”  I don’t believe any cop would do much about that. And so, if the offense isn’t bad enough to attract law enforcement’s attention then why did it affect me so much? That’s the power of the dick pic. It’s why the ‘flasher’ scars their viewer. For me, alone at one and then two o’clock in the morning, that pic may as well have been a pic of a gun or a knife. I felt at risk of my own autonomous safety.

Interestingly, a dictionary leads me to consider this as “exhibitionism”.

Exhibitionism is a form of paraphilia. Exhibitionists (usually males) expose their genitals, usually to unsuspecting strangers, and become sexually excited when doing so. They may be aware of their need to surprise, shock, or impress the unwilling observer.

Impressed, I was not; scarred I was. This experience left me feeling dirty and gross. It left me wondering once again, what I had said to him to make him think this was okay. I blamed myself at times. I’ve “shoulded” all over myself so many times that the entire experience feels more like a segment in a movie. That man still works in that position of influence by the way, as though what he did was just a wee error in judgement with no harm done. The harm is not only done but I believe it to be weakening the societal drive to partner up. And that leaves me saying that for every woman who has lost her libido, there’s a dick pic or just a dick that is responsible for that loss. If you find mine, can ya send it back? Who knows, maybe someday I’ll need it again.

Posted by the couch activist at Sunday, October 24, 2021 No comments:

Writing Was Anne Frank's Therapy Too. 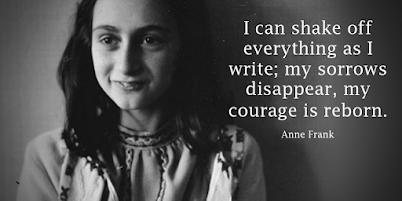 Posted by the couch activist at Monday, October 11, 2021 No comments: