I took part in attending our local Health City event on Tuesday.  It was a bit of a rally, a call to action to members of the Healthcare industry in Ontario.  Our single-payer healthcare system in Ontario is at risk.  Privatization of all kinds of industries is always edging at us, and now the Ontario Government has put forth  Bill 41.

Please sign this online petition #CareNotCuts.  I listened as a black-suited bureacrat used words like "targets" and "corporate model" to explain how less administration will mean better patient care. Let's be real here.  None of us are fooled.  I think the patients would agree that letting valuable healthcare workers go in the process is not acceptable.  Cut costs from above, not below.

My main motivation for attendance was an info session on Medical Cannabis with Psychotherapist Dr. Janet McCulloch.  As you can read by her bio Dr. McCulloch specializes in Neurofeedback and has much experience with trauma and PTSD.  According to google, neurofeedback is defined as "a computer-aided training method in which selected parameters of the patient´s own brain activity, which can normally not be perceived, are made visible to the patient. Via monitor and loudspeaker the brain is shown what it is doing at the moment (feedback)."

Dr. McCulloch gave me great hope on Tuesday.  She held up her fingers in the peace sign and asked us if we knew what that meant.  There was silence so I said, "Peace!".  Without missing a beat she explained that without peace in your life, in your outlook, in your thoughts ... you can never be mentally healthy. She gave us a list of things that do help PTSD, and Doctors are not on the list. Nor are SSRI's or other pharmaceuticals.  The list included exercise, healthy relationships, pets, nature, and Cannabis.

If you were to begin today to learn about Medical Cannabis, you'd think that the 30+ Licensed Producers growing our medicine started things.  But you'd be wrong.  This plant dates back to pyramids and mummies and has stayed with humanity until today.  For some the plant is taboo; while for others it's a way of life.  Dr. McCulloch gave credit where credit is due.  She feels that it is thanks to the grassroots movement of patients that we realize today that Cannabis is medicine. These are patients who took their health into their own hands after being prescribed too many pills.  She said that she feels immense guilt for prescribing so many neuroleptics and benzos.  This Doctor and others like her could bridge the gap between we the patient and the medical industry.  As one Veteran in attendance stated, there is a massive need for a team of Doctors to teach other Doctors about Cannabis.  As one local Doctor stated simply, "it's just another medicine.  Once you understand it, it's just prescribing."

PTSD, trauma, and depression need treatment.  The conventional therapies for these conditions vary in action, none of which are successful for everyone.  For some of us, none work.  In my own words, I'd say that those medicines are gut-sterilizing, orgasm-stealing, zombifyers.  I know from experience. So, in the absence of safe and effective conventional meds, the grassroots movement of cannabis ingesting humans have proven time and time again that this plant is medicine.  It's amazing the ways patients are using Cannabis to heal themselves.  Corrie Yellend cured her anal and skin cancer with Cannabis oil infused suppositories that she made in her kitchen and stored in her freezer.  Tommy Chong uses them, countless others too.  Brave Mykayla is now in remission from Leukemia because Cannabis oil was used in conjunction with conventional treatments.  Coltyn Turner is in remission from debilitating Crohn's disease. And the three Veterans who were also in attendance at this talk prove to themselves, their families, and their Doctors that Cannabis treats PTSD every day.

A separation and a growing animosity exists between many patients and Doctors.  There is a gap that needs to be bridged.  In speaking to fellow Cannabis patients, I sometimes feel like they're stuck in fight mode.  They don't realize we've won and are winning.  Some go to well-meaning Cannabis clinics and berate the very Doctors who have put their licenses on the line for us.  We need to work like Cannabinoids ... that is better as a team! 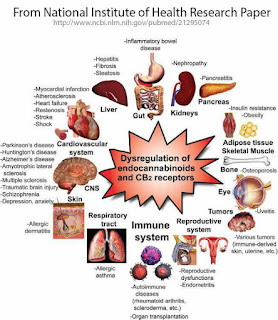 Posted by the couch activist at Thursday, November 24, 2016